The growth of Bag Books 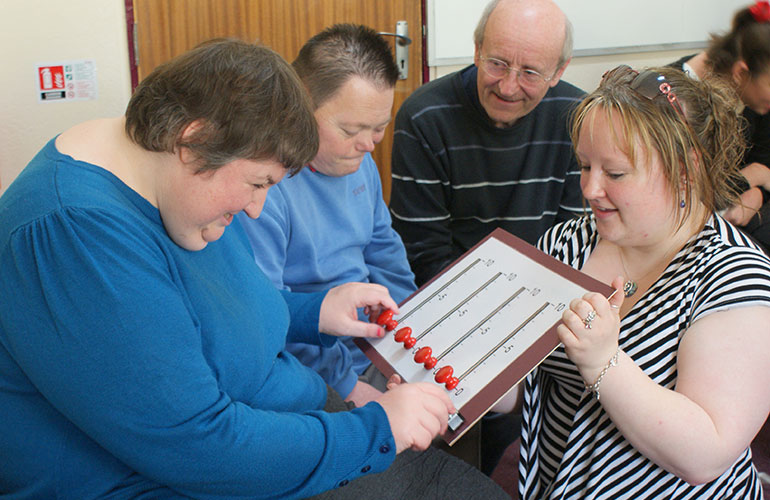 Whilst Head of Department for pupils with profound and multiple learning difficulties, Chris Fuller began to write and tell stories based on the development of early language and communication skills and inspired by the tactile and auditory resources produced for other curriculum areas.

She found that if her pupils with the complex needs were helped to hold and feel the objects and materials, their attention was captured and held and they responded to the emotional changes in her voice - they smiled when her voice smiled etc. and so it was possible to engage them in story experiences. With constant repetition, the short sentences and unchanging sequence of the objects and actions, enabled them to begin to anticipate what was coming next and so, like any child, to enjoy a familiar tale often told.

In 1989 Chris was approached by the Consortium for Learning Difficulties in London to write a "do-it-yourself manual" on how to make six stories. This was published and went into re-print but later research found that only two per cent of the teachers questioned had had the time or, in some cases, the skills, to make up the stories.

So, in 1993 Chris established the charity to supply the books ready made and at an affordable price.

Since then Bag Books has been producing a growing range of multi-sensory books. Initially, they were written just for children, but today there are multi-sensory books which are age appropriate for everyone, from youngsters to older adults.

Why the name Bag Books?

Originally the page-cards were supplied in heavy duty calico bags so the name was obvious. The logo was developed in the style of a Makaton symbol, but the page-cards were not sufficiently protected and we progressed to sending them out in cardboard boxes but by that stage the name and logo had become well known in the field so we decided to keep them.

Chris Fuller retired in 2008 with Dean Casswell taking over as Bag Books' first Chief Executive. 2008 also saw move from Fulham into larger premises based in Vauxhall later that year. Over the last 12 years the number of participants in our storytelling sessions has quadrupled and our work has been recognised with several awards. Dean retired in 2019 and was replaced by Lucy Barrett.

We're immensly proud that our work continues to grow and during 2020 we have started to offer our storytelling digitally to meet with the demands of our beneficiaries who have been greatly affected by the pandemic. Reaching over 16,000 views our stories have been watched and shared by people all around the world! 2022 looks set to be a positive year, starting with the release of a brand new title by Chris Fuller and new 'At Home' title for families.